This Is Local: NYS Farm Brewery

The farm brewing law in New York State was put into effect in 2013 with the goal to create a demand for more locally sourced ingredients in NY beer.  Beer from NYS farm breweries will include at least 60% of New York sourced hops and malts. This helps NY suppliers grow which, in turn, lets them develop new flavors and an even greater quality of ingredients.

TIL Brewing chose to be a NYS Farm Brewery because we want to look local whenever possible and know the quality of ingredient that can be sourced throughout the state.

We are joining a number of other NYS Farm Breweries, including several from the Western NY area.  Check them out because you're supporting them and the NY farmers that supply them.
some farm breweries around the Western NY area:
West Shore Brewing
Windy Brews
Rusty Nickel Brewing
Five&20 Brewing
East Aurora Brewing
Big Inlet Brewing
​In early 2021, several of these brewers got together and brewed up Ohhh Fudge.
a chocolate imperial porter brewed with locally sourced ingredients 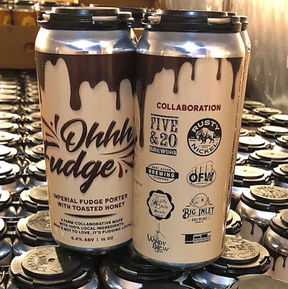